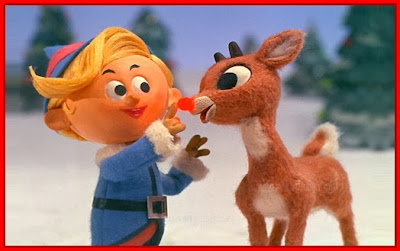 A man named Bob May, depressed and brokenhearted, stared out his drafty apartment window into the chilling December night. His 4-year-old daughter Barbara sat on his lap quietly sobbing.

Little Barbara couldn't understand why her mommy could never come home. Barbara looked up into her dad's eyes and asked, "Why isn't Mommy just like everybody else's Mommy?" Bob's jaw tightened and his eyes welled with tears.

Her question brought waves of grief, but also of anger. It had been the story of Bob's life. Life always had to be different for Bob.

Small when he was a kid, Bob was often bullied by other boys. He was too little at the time to compete in sports. He was often called names he'd rather not remember. From childhood, Bob was different and never seemed to fit in. Bob did complete college, married his loving wife and was grateful to get his job as a copywriter at Montgomery Ward during the Great Depression. Then he was blessed with his little girl. But it was all short-lived. Evelyn's bout with cancer stripped them of all their savings and now Bob and his daughter were forced to live in a two-room apartment in the Chicago slums. Evelyn died just days before Christmas in 1938.

Bob struggled to give hope to his child, for whom he couldn't even afford to buy a Christmas gift. But if he couldn't buy a gift, he was determined to make one - a storybook! Bob had created a character in his own mind and told the animal's story to little Barbara to give her comfort and hope. Again and again Bob told the story, embellishing it more with each telling.

Who was the character? What was the story all about? The story Bob May created was his own autobiography in fable form. The character he created was a misfit outcast like he was. The name of the character? A little reindeer named Rudolph, with a big shiny nose. Bob finished the book just in time to give it to his little girl on Christmas Day. But the story doesn't end there.

The general manager of Montgomery Ward caught wind of the little storybook and offered Bob May a nominal fee to purchase the rights to print the book. Wards went on to print,_ Rudolph the Red-Nosed Reindeer_ and distribute it to children visiting Santa Claus in their stores. By 1946 Wards had printed and distributed more than six million copies of Rudolph. That same year, a major publisher wanted to purchase the rights from Wards to print an updated version of the book.

In an unprecedented gesture of kindness, the CEO of Wards returned all rights back to Bob May. The book became a best seller. Many toy and marketing deals followed and Bob May, now remarried with a growing family, became wealthy from the story he created to comfort his grieving daughter. But the story doesn't end there either.

Bob's brother-in-law, Johnny Marks, made a song adaptation to Rudolph. Though the song was turned down by such popular vocalists as Bing Crosby and Dinah Shore, it was recorded by the singing cowboy, Gene Autry. "Rudolph the Red-Nosed Reindeer" was released in 1949 and became a phenomenal success, selling more records than any other Christmas song, with the exception of "White Christmas."

The gift of love that Bob May created for his daughter so long ago kept on returning back to bless him again and again. And Bob May learned the lesson, just like his dear friend Rudolph, that being different isn't so bad In fact, being different can be a blessing.

This has always been my favorite animated Christmas story. Now I love it even more. Thank you for telling the story behind the story. Time for me to share this. May everyone have a Happy, Peaceful Holliday!

Oh wow!!!... I own a copy of that book!!!. I purchased it at a yard sale almost 20yrs ago.... I never knew the story & so glad info was shared. I'm sooo glad I purchased it in spite of how old it looked as far as character illustration, colors, etc...it is in otherwise perfect condition.....wow... I purchased it cuz its my allll time favorite & looked to be an early copy of the story. It has Montgomery Ward info on it so I knew it was marketed by them but NEVER knew all this.....

what a lovely story and no money was mentioned xx

Love this story which I had never heard before. My kids grew up with Rudolf as well as myself.

What a beautiful story! I absolutely love it!

what a wonderful story. thank you.

I am so grateful, that Bob and his little girl's lives were blessed, so immensely! I am now 51, and although I have never read the book, you can't pay me to miss the movie. I love the classic Rudolph the Red-Nosed Reindeer, and I watch it with my grand kids. May God continue to bless you and your family Bob. :)

Wow this story touched my heart, and every year at this time I sing this song and read the story to my grandkids and now I know the story behind the story

This is so touching... The magic of Love!!

This is such a wonderful story and history lesson all in one. Have sang the song and watched the show every since it came on T.V. It is such a lovely story of how it all began.

This isn't exaxctly true. Per "Snopes.com" it wasn't written for a little girl who's mother was dying of cancer. It was a prmotional gimick designed to draw people into Montgomery Wards during the Christmas season. Its "stories" like this that really irk me. Just inspire using the truth not fictional, historically inaccurate stories.

there is always someone who spoils everthing just not at this time kids need hope and what better way then this book and story true or not what does it matter its Christmas for gosh sakes people be happy and everyone Merry Christmas;

What a wonderful inspirational story!

There is always someone who just kills the spirit when so many other people are enjoying something. I have loved Rudolph since I was a little girl. This story true or not, makes it fit even more. I felt like Rudolph and now I know why. Thank you and have a wonderful and Merry CHRISTMAS!!

This is a real good story. Rudolph the Red-nosed reindeer has always been one of my favorite songs at Christmas time and more for the movie that came out. This was passed on to our girls and continues to be the favorite of small children the world over. Thanks for publishing this information.

wow, this was my favorite song when I was a child and the movie too!!

Glad to hear someone who was different did well even when life threw a curve at them. As for Snopes, ever stop to think that it isn't always correct or have the full story?

If you don't believe snopes, believe this
http://urbanlegends.about.com/od/christmaslore/a/rudolph_the_red_nosed_reindeer.htm

I love this story ,I like many others never knew this

Does it really matter if the story was made up? No it doesn't! People who are always trying to prove something wrong have serious issues. Its the Holidays and young and old alike love the story.

Every year this “feel good” story goes around and it does have a thread of truth throughout more or less. Actually more less than more. It has been embellished to tug on the heart string of people at Christmas. Actually Robert grew up in an affluent Jewish neighbourhood in New York city. His parents took a big hit in the stock market crash and he moved to Chicago and went to work as a copywriter for Montgomery Ward. His wife did get cancer and pass away and he did have a 4 year old daughter, Barbara. But that is where the story changes. “Montgomery Ward had been buying and giving away coloring books for Christmas every year and it was decided that creating their own book would save money and be a nice good-will gesture”. Bob was given the assignment. Evelyn did not die “a few days before Christmas 1938” she died in July 1939. Bob also had read the final draft of the poem to her before her death. He chose reindeer because Barbara liked the deer at the Chicago zoo. He was approached about selling the rights but because Montgomery Ward held the rights, turned them down. Wards did give him the rights and later his brother in law did write the song. He remarried in 1941 to Virginia, a Wards employee and a Catholic, and had five more kids. Bob May wrote two sequels to Rudolph the Red-Nosed Reindeer. The first is mostly in prose (except that Rudolph speaks in anapaestic tetrameter), written in 1947 but only published posthumously as Rudolph's Second Christmas (1992), and subsequently with the title Rudolph to the Rescue (2006). The second sequel is entirely in anapaestic tetrameter like the original: Rudolph Shines Again (1954). May also published four other children's books: Benny the Bunny Liked Beans (1940), Winking Willie (1948), The Fighting Tenderfoot (1954), and Sam the Scared-est. Scarecrow (1972).[6] He died in August 1976 and is buried in St. Joseph Cemetery, River Grove, Illinois.
And now you know the rest of the story.

I'M 51 AN I STILL WATCH IT EVERY YEAR WHEN IT COMES ON TV. WITH MY GRANKIDS AN NOW THEY LOVE IT TOO. I PRAY THE STORY LIVE ON AN ON. GOD BLESS THAT LITTTLE GIRL GROWN NOW I'M SURE AND HER DAD BOB. GOD IS A MIRACLE FORISFITS LIKE ME AN BOB. HAPPY HOLLIDAYS

I'm 55 years old and still watch it and now have it on DVD.

Your copy may be worth more than you can imagine but I couldn't imagine selling it...

Wow that was very awesome . you can tell daddy loves his daughter . merry Christmas and happy new year to that very family and god bless

Hats off to Montgomery Ward for doing the right thing! More corporates should follow their example.

You just miss it, it was about his greatest gift to comfort his daughter," reading the story with ur heart,not ur mind" and that's the world,it always wants to make money" God richly bless this family,and was chosen" God always gets the glory,!I will share this story with my preschool children" remind each child they are special, and can be anything they want to be" and to pray for those kids who have been abuse" Jesus loves the little children"AMEN God bless you sir and have a beautiful joyful Christmas������

I AM 72 AND REMEMBER SINGING THIS AS A YOUNG CHILD