Coronavirus treatment approved in the UK and US which uses blood plasma from recovered patients helps the infected get better within three days, study claims. 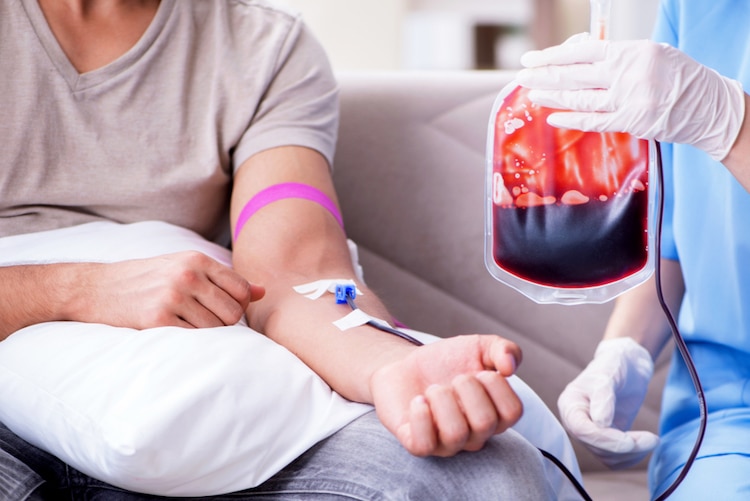 A coronavirus treatment already approved in the UK and US which uses blood from recovered patients can help the infected get better within three days, a study has found.

Ten COVID-19 patients in China who were severely ill in hospital saw their symptoms disappear or rapidly improve within 72 hours after the therapy.

They were given a dose of plasma donated from COVID-19 survivors, which had the antibodies necessary for their immune system to clear the virus.

Known as convalescent plasma therapy, it has recently been given the green light by medical regulators in the UK and US to trial on critically ill patients.

The promising therapy, which was first used a century ago in the 1918 Spanish flu pandemic, has been used already in China and the US.

As well as proving to be life-saving, the therapy appears to be safe so far, with no serious side effects observed in the small study group.

It comes after a New York City mother who survived coronavirus last week became one of the first Americans to donate her blood plasma in hope of helping others. Tiffany Pinckney, 39, said she felt like 'a beacon of hope' for those suffering.

But although experts say convalescent plasma is 'an important area to pursue', there is no conclusive evidence it is effective yet.

There is no cure for the killer coronavirus, which has infected more than 1.3million people worldwide and killed almost 80,000. Thousands of patients worldwide are involved in trials of promising medicines.

A key advantage to the blood based therapy is that it’s available immediately and relies only drawing blood from a former patient.

It is also significantly cheaper than developing a new drug, which costs millions to take through trials and regulation before mass production.

The treatment - used for around a century for other infections - works by bolstering a patient's own immune system to fight the virus.

Infusing patients with blood plasma has also been used to tackle SARS and MERS, two similar coronaviruses, as well as the deadly infection Ebola.

Plasma makes up around 55 per cent of all blood volume and provides the liquid for red and white blood cells to be carried around the body in.

By injecting this into patients it can provide their bodies with a vital dose of crucial substances called antibodies.

Antibodies can only be created by people who have already been infected and learnt how to fight off an infection, such as SARS-CoV-2.

It may be the best hope for COVID-19 patients while scientists work to develop new, specific treatments for the disease.

It is significantly cheaper than developing a new drug, which costs millions of dollars to take through trials and regulation before mass production.

The study in Wuhan – where the coronavirus pandemic began in December – was led by Kai Duan of China's National Biotec Group Co. Ltd.

Because it was a pilot study, which assess the feasibility of a treatment, the findings are only preliminary.

However, the results were published in a respected journal called the Proceedings of the National Academies of Sciences.

Ten patients at three different hospitals were enrolled to get convalescent plasma therapy. They also received other promising drugs.

The researchers said all clinical symptoms, which included the tell-tale signs of a fever and cough, subsided within three days.

The patients' liver and lung function as well as blood oxygen levels were also found to have improved, signs they had fought off the virus.

Two of three patients who were hooked up to a ventilator to assist with breathing were taken off, and given oxygen delivered into the nose.

The study was not designed to compare the outcomes for patients who received the antibody therapy with those who did not.

That would have shown if it was the convalescent plasma that worked or the patients just recovered on their own.

But the authors did create a control group from a random selection of ten COVID-19 patients treated in the same hospitals with a similar outlook.

They were matched to the pilot study participants by their age, gender and illness severity.

Over several weeks, there were shown to be obvious differences in how the control group patients deteriorated.

Three died, six saw their conditions stabilise, and one got better during the course of the study.

Of those who received convalescent plasma, none of the 10 patients died, three were discharged from the hospital, and the remaining seven were rated 'much improved' and ready for discharge by the end of the study.

The authors wrote: 'This pilot study on [convalescent plasma] therapy shows a potential therapeutic effect and low risk in the treatment of severe COVID-19 patients.

'One dose of [convalescent plasma] with a high concentration of neutralising antibodies can rapidly reduce the viral load and tends to improve clinical outcomes.'

Professor Sir Munir Pirmohamed, President of the British Pharmacological Society, said the findings should be taken with caution.

'This paper reports the outcomes in 10 patients with severe COVID-19 who were treated with convalescent plasma. The authors did compare the 10 cases with a concurrent control group and showed some encouraging results.

'However, this was not a randomised trial and all patients also received other treatments including antivirals such as remdesivir which are currently in trials for COVID-19.

There were no side effects recorded in this small study, other than an unexpected red bruise on a patient's face.

Sir Munir said: 'Even if shown to work, scalability to treat large numbers of patients may become an issue. As the authors indicate, there is a need for robustly designed randomised controlled trials to show efficacy of convalescent plasma.'

The Medicines and Healthcare products Regulatory Agency (MHRA) approved the blood-based therapy in early March, meaning NHS patients can get the treatment.

The Food and Drug Administration - the US version of the MHRA - approved the use of the blood-based therapy on March 23 as an experimental treatment in clinical trials, and for critical patients without other options.

Ms Pinckney, a mother in New York City who survived coronavirus, became one of the first Americans to donate her blood plasma.

'It is definitely overwhelming to know that in my blood, there may be answers,' Ms Pinckney told the Associated Press.

She got sick the first week of March, and when breathing deeply caused her chest pains, she remembers 'being on my bathroom floor crying and praying'.

So when Mount Sinai, the hospital which diagnosed her, called to check on her recovery and ask if she'd consider donating, she didn't hesitate.

'It's humbling. And for me, it´s also a beacon of hope for someone else,' she said.

Jason Garcia, a 36-year-old aerospace engineer from California, donated his blood on April 1 after fighting COVID-19 in March.

After hearing his blood would be used to treat three patients with the coronavirus, he told CNN: 'This can be turned into a life-saving opportunity for someone who can't fight off this disease.'

COVID-19 survivor Diana Berrent, 45, said those who have recovered 'can be superheroes'.

The New Yorker was the first in her state to donate her blood to Columbia University, where scientists are screening plasma for antibodies and determining which ones could help fight the killer infection.

Doctors in China, where the COVID-19 outbreak began in December 2019, were the first to attempt treating patients this way.

Recovered patients in China, including in Wuhan, Shanghai and Beijing, have been donating their blood in hospitals since February.

Special units for blood donation have been set up in hospitals in China with leading doctors claiming to have had encouraging early results with COVID-19 patients.

The doctors of the latest study in China described how each patient recovered, even if they had been admitted to hospital with a poor prognosis.

A 46-year-old man with high blood pressure showed up at a hospital with fever, cough, shortness of breath and chest pain.

He was put onto a mechanical ventilator to push oxygen into his lungs, and still his blood-oxygen level was a dismal 86 per cent. Normal readings are between 95 and 100 per cent.

On the eleventh day of his symptoms, the patient was given convalescent plasma. The next day, his blood tested negative for infection with the SARS-CoV-2 virus.

His blood-oxygen level rose to 90 per cent, and he was able to be weaned off the ventilator he had been relying on to survive for three days.

Patient's liver function was also measured, because COVID-19 can cause organs to malfunction and even fail.

The man's immune system and liver function, both of which were showing signs of inflammation along with his lungs, stabilised four days after the antibody infusion.

Another patient, a 49-year-old woman with no underlying health conditions, received convalescent plasma on day ten of her symptoms.

She had been admitted to hospital quite early on because she had shortness of breathe. By day seven, scans of her chest showed fluid inside her lungs – called ground glass opacity.

By day 12, she had cleared the virus from her system and her chest X-ray showed remarkable improvement in her lungs.

The findings are promising and will fuel more research into convalescent plasma, which was recently labelled a 'very important area to pursue' by Dr Mike Ryan, head of the World Health Organisation's health emergencies program.